Everyone knows that one joke I tell about how it seems that everyone has just about every nationality possible in his or her family tree. “Oh yeah, I’m 10% Irish, 15% Cherokee Indian, 4% Slovak, 30% Polish, 9% English, 15% Hungarian, 10% Greek, 5% Italian, and 2% Milk!” You all know the people, and you all know the joke. But whenever it’s my turn to give my DNA facts, all I usually say is, “Well, I’m Irish…” Which is usually followed by someone saying, “Wait but you don’t have red hair!” (At this point, you can all just imagine me letting out  big sigh…)

I am Irish, and would be nearly all-Irish, had my great-great grandmother not been from Switzerland! That’s right people: there is something more to this Irish girl’s backstory!

On my mother’s side of the family, we have a few relatives that live over in Switzerland, who come to visit the U.S. and our family in Syracuse every once in a while.

Once I got back from my trip to Scotland (see Scotland post for details), I told myself that I was finished traveling outside of London for sometime before moving back to the U.S. It was not surprising at all that sitting still became very hard for me, while booking a flight to Basel was easy! 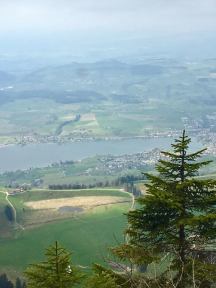 I woke up early Friday morning, and made my way over to Gatwick Airport. to fly to Basel, Switzerland and meet my Swiss cousins! I got off the plane, and made my way to baggage claim. As I walked to the exit, I noticed that there were three signs, each with a flag. “THIS WAY TO GERMANY,” “THIS WAY TO SWITZERLAND,” and “THIS WAY TO FRANCE”…What…I spent about ten minutes freaking out, trying to figure out what country I just landed in, questioning whether or not I had even gotten on the correct plane. Eventually, I followed the Switzerland sign and foun

If you read my post about my trip to Scotland, you’ll remember my obsession with the sheep…this trip was similar, except this time it was cows. Although I did manage to take some pretty amazing pictures, every other picture on my camera roll was of cows…

The first day was the busiest. After a quick nap, we made our way to Mount Rigi in the Swiss Alps. We took the tram, the trolley, a bus, a boat, and a cable car, because the Swiss people are very proud of their public transportation. After that, we walked around Lucerne, took lots of pictures, and met up for dinner.

The next day, we visited the Cailler Chocolate Factory, where I learned that there could actually be such a thing as too much chocolate. When I was told that they would be giving us chocolate samples during the tour, I was so excited; but I haven’t been able to eat much chocolate since then. So everyone say a quick prayer in hopes that my post-chocolate overdose will pass. Later that day, we took a train to Zurich to meet more family, and where I would spend the night.

My time in Zurich was spent touring the city, loo 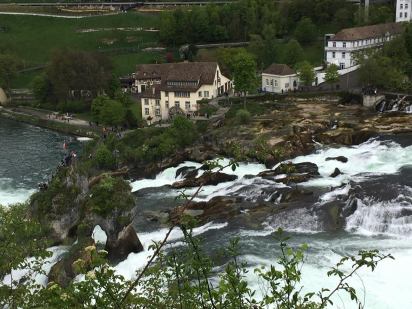 king through old family photo albums, and visiting the Rhine Falls. We ended up back in Basel on Easter to join everyone else for a raclettle dinner!

I was so thankful for the opportunity to go to Switzerland and see the beautiful country that my great-great grandmother was from, and for the generosity and hospitality of my Swiss cousins!

I tell you, Switzerland is an amazing country…there are more cows in that country than people, and I think my diet of the weekend was solely cheese and chocolate. The Swiss flag is a big plus too (get it??) What a dream!